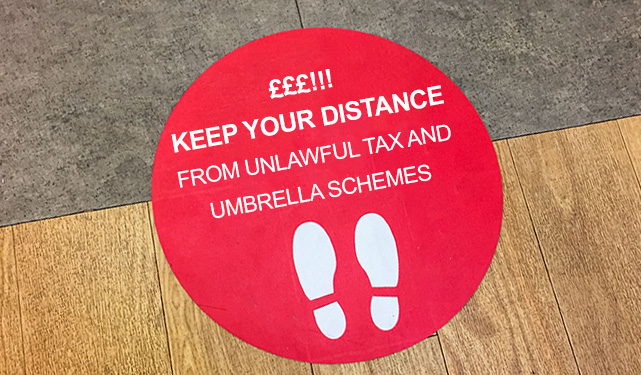 HMRC has warned contractors not to be fooled by unlawful tax and umbrella schemes advertising unusually high rates of take home pay.

As the deadline for sweeping IR35 reforms in the private sector draws closer, HMRC has launched a new campaign against tax avoidance and ‘dodgy’ umbrella schemes.

The ‘Tax Avoidance - Don’t Get Caught Out’ campaign featured on the Government website highlights the personal cost of unintentionally participating in a tax avoidance scheme.

It tells the story of Tanya - a single parent working as a nurse in her local hospital. She found a job via an agency, which recommended using an ‘umbrella company’ offering the highest rates of take-home pay. Unfortunately, this umbrella turned out to be a tax avoidance company, and Tanya was left with an unexpected tax bill on top of the high fees she had already paid to the company.

“I was sold on the benefits of higher pay,” Tanya said. “I trusted my agency and umbrella company and I feel like they lied to me and scammed me, I thought my umbrella company would care but they didn’t.

“My agency and umbrella company sold me the benefits of higher pay through what they described as their Tax Plan model. This has now left me owing HMRC money and my umbrella company has washed their hands of me, they just disappeared and left me with the tax bills.”

When he started working as a contractor, he searched for an umbrella company on a comparison website, which he assumed was legitimate. When HMRC spotted small discrepancies in his PAYE data, it informed Duncan that he was on a tax avoidance scheme and needed to pay some additional tax.

He said: “I did an online search for umbrella companies and came across a comparison website. I spoke to one of the guys there, filled in a form and he suggested three companies. He said, ‘these people have got this process in place, and it pays this much’. I just chose one of them, they got me set up and that was it.

“When I got the letter through from HMRC my first thought was ‘that was quick’. I had only started using the umbrella company a few months earlier, which was still the same tax year. I had a couple of sleepless nights at the start – that was really the worst part.”

How to avoid tax avoidance and illegal umbrella schemes

There are a number of warning signs that might indicate that a scheme is unlawful. These include:

Miles Grady, Director of Umbrella.co.uk, said: “This is not the first time we have seen widespread problems with illegal tax avoidance and umbrella schemes. HMRC did a fair job of stamping out those schemes the first time round, but with wholesale changes to the IR35 system now just a few months away, more dodgy operators are looking to take advantage of unsuspecting contractors.

“It’s not just well-paid bankers and IT consultants - they’re taking advantage of nurses, cleaners and tradespeople, leaving them with mammoth tax bills. Remember, if a scheme looks too good to be true, it probably is. If you’re not sure, take advice from a professional you trust - an accountant, a lawyer or HMRC themselves. At Umbrella, we’re always happy to offer advice to those that need it.”

For more information about tax avoidance, umbrella schemes and IR35 legislation, speak to a member of the team today. Call: 0800 121 6513.