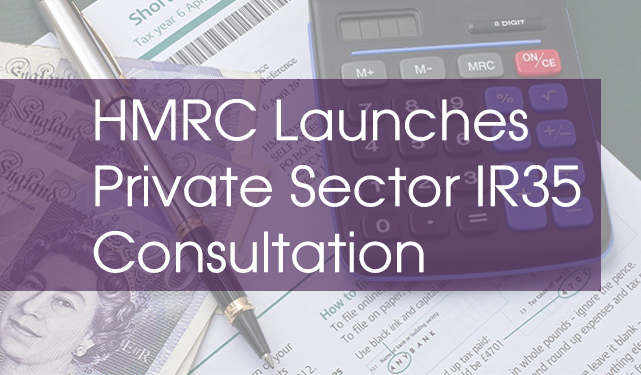 HMRC has launched a fresh consultation on changes to off-payroll Intermediaries Legislation (IR35), due to take effect in the private sector from April 2020.

The changes would see reforms introduced in the public sector in 2017 extended to the private sector.

The change will affect contractors that operate through an intermediary like a limited company or personal service company (PSC).

Instead of judging their own IR35 status, the private sector organisation that engages the contract will make this decision. It could mean that more contractors are deemed ‘inside IR35’ and liable to  pay income tax and National Insurance contributions.

Announcing the consultation, Treasury Minister Mel Stride said that the original IR35 rules, introduced in 2000, were “frequently misapplied”. He also claimed that the 2017 reforms in the public sector had generated an extra £550 million for the Treasury in 12 months.

HMRC says that the consultation will help ensure that the reforms are suitable for the “large and diverse” private sector.

Contractor organisations have warned against extending the public sector IR35 rules to the private sector.

IPSE Deputy Director fo Policy Andy Chamberlain warned that the changes would hamstring freelancers and clients and destroy one of the UK’s greatest competitive advantages - its flexible labour market.

He added: “HMRC has claimed pushing these changes into the public sector generated £550 million, but this is at the cost of far-reaching long-term damage.

“In the NHS, TfL and right across the public sector, the changes led to mass contractor walkouts, causing disruption, staff shortages and even the cancellation of major projects.”

The CBI and other business organisations have also issued warnings about what they see as heavy-handed legislating in the sector.

Nick Holmes, Director of Umbrella.co.uk and Board Member of the FCSA, which represents professional employment service providers, said: “At this stage, it is unlikely that the consultation will stop the private sector IR35 stages. But in previous consultations, HMRC has made some concessions to contractors. In the last consultation, for example, HMRC agreed to exclude small private sector organisations from the new IR35 rules.

“Looking at the latest proposals, there are some positives and negatives for contractors.

“It looks like HMRC has learned some lessons from the public sector rollout. They say that they will require better communication with contractors to make the process more transparent. They have also committed to reviewing the flawed IR35 checking tool.

“As for the negatives, it is disappointing to hear that HMRC will scrap the 5% expenses allowance, which was one of the few benefits that contractors could enjoy if they were deemed to be inside IR35. There is also no mention of any kind of appeals process that contractors can use if they think they have been treated unfairly.”

As part of the consultation, HMRC wants to hear from contractors that will be affected by the IR35 reforms as well as agencies, companies that engage contractors and other agents in the field.