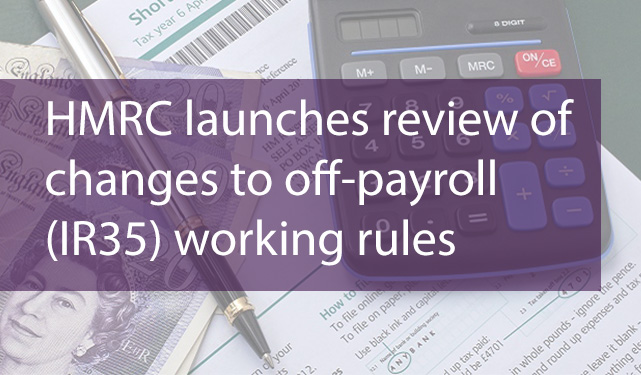 The Government has this week launched a review of the upcoming change to off-payroll (IR35) working rules. But the review has already been branded ‘limited’ and ‘meaningless’ by industry experts.

The review will gather evidence from contractors and large and medium-sized businesses and will determine if any further steps can be taken to ensure the ‘smooth implementation’ of the reforms.

Legislators will need to act quickly, however, because the reforms are still due to take effect in April 2020.

Industry experts were fast out of the blocks in criticising the government’s ‘meaningless’ review.

“Not only has the government not said it will pause the changes, it has also allocated far too little time for a full review and said nothing about selecting an independent chair.

“Such a limited review would leave the freelance sector floundering.”

Off-payroll working rules were first introduced in 2000 to tackle so-called ‘disguised employment’. Under the rules, contractors and freelancers had to confirm that they met HMRC’s definition of self-employment or they would be required to pay tax as if they were employees.

From April 2020, however, every medium and large private sector business will be responsible for judging the IR35 status of their contract workers. This rule was already introduced in the public sector in 2017.

Businesses and contractors have criticised the proposals, arguing that it will increase contractor costs by up to 14% and limit the tax freedom enjoyed by the self-employed.

Karen O’Donnell, Business Development Manager at Umbrella.co.uk, said: “Rushed out ahead of the April deadline and limited in scope, it appears as though the government has already made up its mind on how this review is going to go.

“The government was backed into a corner on IR35 during the recent election campaign after the Lib Dems said they would review the reforms and Labour promised to scrap the change altogether. With their status as the ‘party of business’ on the line, the Conservatives also promised  a review of the policy.

“Contractors and businesses may receive some small concessions, but it would be a mistake not to finalise your plans for IR35 in the private sector.”