We have a very tasty latest entry for our Umbrella Bake Off.

Daniel Bird from Accounting kept the competition strong and the office fed with his Carrot and Walnut Cake with cream cheese filling.

We have 20 staff taking part so expect more than a bakers dozen of delicious cakes over the coming months! To make sure everyone in the department takes part they have the motto “No Bakey, No Cakey!” 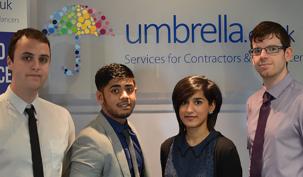 New government plans for ‘digital tax accounts', that could see contractors forced to update their tax information every quarter, have been snubbed by a bureaucracy watchdog that works with HMRC.

In a report published earlier this month, the Administrative Burdens Advisory Board (ABAB) predicted that plans announced by George Osborne – including mandatory quarterly tax updates – would create too large a burden on small businesses.

If you are self-employed or a sole trader it is important that you keep a record of all your business income and expenses in order that you can complete your annual tax return. You also need to keep a record of other income you receive i.e. bank interest, dividends etc.