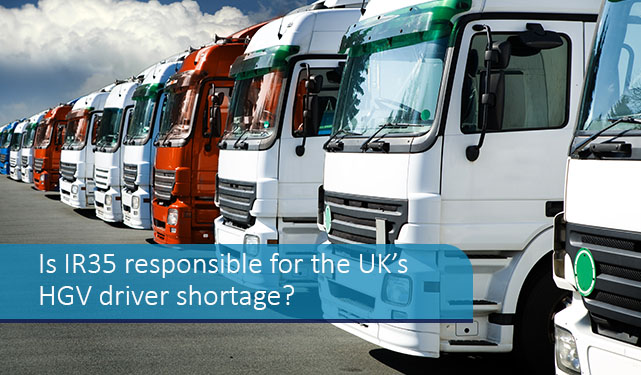 Is IR35 responsible for the UK’s HGV driver shortage?

The HGV driver shortage is wreaking havoc on UK supply chains. It’s estimated that Britain needs an extra 100,000 HGV drivers and the shortage is resulting in long queues at petrol pumps and missing stock on supermarket shelves.

So far, the shortfall in drivers has been attributed to issues like Brexit and the effects of the coronavirus pandemic. But new research from the Road Haulage Association (RHA) reveals that recent tax changes could share a portion of the blame.

Other common responses included drivers retiring (58%), drivers leaving to go to other industries (47%) and unsatisfactory rates of pay (46%).

What is IR35 and how does it affect HGV drivers?

Also known as off-payroll working, IR35 rules were introduced in 2000 to tackle so-called ‘disguised employment’. This is when an individual, who would ordinarily be considered an employee for tax purposes, sets up a limited company in order to pay less tax and National Insurance.

IR35 rules were changed in April 2021, large and medium-sized private sector companies were made responsible for judging a contractor’s IR35 status. Previously, it was up to the contractor to make this determination.

As a result of this change, many more contractors have been forced to pay tax and National Insurance as if they are employees.

There is also a strong suggestion that some of the private sector companies responsible for making these determinations don’t have the resources or experience to get the decisions correct.

It’s thought that most HGV drivers will be caught out by IR35 rules. Effectively, this means that it’s no longer worthwhile to operate through limited personal service company (PSC). For these drivers, working through an umbrella company is a simpler, more attractive alternative.