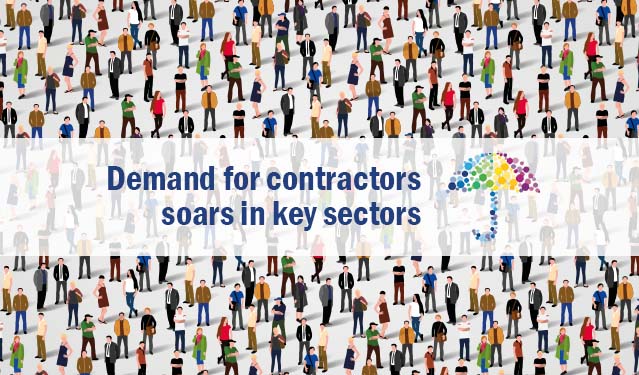 Employer demand for contractors is soaring in key sectors, including IT and construction, as the economy bounces back from the coronavirus pandemic.

Competition for contractors has been intensified by a number of factors, including long-term labour shortages and an IR35 exodus from the contracting sector.

Recruiter trade body REC said that there was ‘fierce competition’ in the jobs market in September, where labour shortages contributed to issues in petrol stations and on supermarket shelves.

They did note, however, that demand for IT contractors dipped slightly from a high index score of 70.8 in August to 68.9 in September.
Vacancies in the construction sector meanwhile hit a new all-time high in September, topping out at 43,000 according to the Office for National Statistics. This is the highest number of construction vacancies on record since 2001 and is an increase of 5,000 vacancies compared with August.

Neil Carberry, Chief Executive of the REC, said: “Businesses’ confidence levels remain robust and that has led to sky-high demand for workers. Demand is still growing for both temporary and permanent staff, but permanent hiring now leads the way after starting its recovery much later than for temps.”

A separate study of contractors in the UK found that more than half (56%) were planning to move to permanent employment contracts to escape the IR35 reforms introduced earlier this year.

The average contractor said that they expected to lose £20,000 in take home pay as a result of the changes and 98% agreed that IR35 would harm the UK economy.

With a high proportion of contractors preparing to leave short-term contracting, companies will have a smaller pool of workers to choose from, which could drive up rates.

Miles Grady, Director of Umbrella.co.uk, said: “Highly skilled contractors played an essential role in pulling the economy out of the pandemic. While businesses held off hiring permanent employees, much of the country’s economic growth was driven by a disproportionate number of temporary workers.

“Tax policies that hurt contractors have almost certainly slowed down our recovery by pushing more high skilled workers into employment.”

For more information about contracting or working through an umbrella company, speak to a member of the team today. Call: 0800 121 6513.