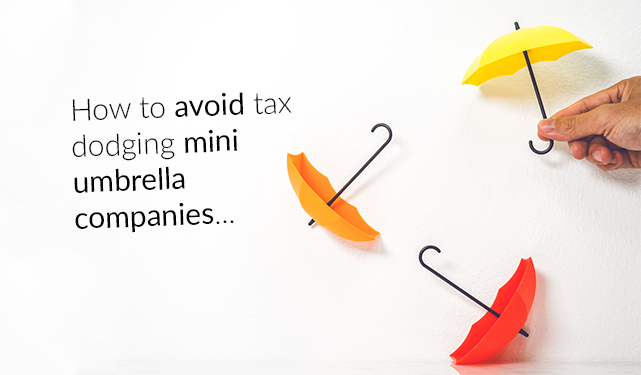 Most umbrella companies that you’ll see online are legitimate businesses that pay the correct amount of tax and comply with relevant employment legislation.

Unfortunately, the sector is brought into disrepute by a small group of illegitimate companies that seek to defraud contractors and the state. It seems the latest attempt at doing this is with so-called ‘mini umbrella companies’.

A recent BBC investigation found that around 48,000 mini umbrella companies have been created in the UK in the last five years.

The purpose of these mini umbrellas is to reduce the tax and national insurance liabilities paid by agencies. The investigation found that more than 40,000 people in the Philippines had been recruited to front small British companies.

Each of these companies will employ a small number of sub-contractors. The investigation revealed that some sub-contractors were employed by G4S to work at Covid test centres.

The mini-umbrellas benefitted because they could claim the government’s Employment Allowance, which offers an annual discount of £4,000 per company on national insurance contributions.

Most umbrella companies and other large employers pay 13.8% in national insurance contributions on employee earnings when they earn more than £170 per week.

Some agencies can use a network of mini umbrella companies to significantly reduce their national insurance liability.

How do mini umbrella companies operate?

The BBC investigation profiled a man called John, who saw a job advert for staff at his local G4S Covid testing site. He rang an employment agency and secured the £10 per hour job.

However, when John received his payslip, he found he wasn’t being paid by G4S or the agency. He was being paid by a company he had never heard of.

Looking at Companies House online, John found that the company had only been set up a month before he started working and that its director was from the Philippines.

HMRC warned against this kind of arrangement in 2015, saying schemes designed to exploit the Employment Allowance “simply did not work”. But recent evidence suggests that the practice is fairly widespread.

In many cases, contractors may not even be aware that they are being used in these tax avoidance schemes. But the UK Gangmasters and Labour Abuse Authority (GLAA) says that it could result in the erosion of their employment rights.

A spokesperson said: “For employees [contractors], who are often unaware of these arrangements, the use of this model can result in the loss of some employment rights.

“Workers are usually unaware of who their employer is, and they can be moved regularly between [mini umbrella companies] to help maximise profits from the fraud.”

How to avoid joining a mini umbrella company

For more information about joining a legitimate umbrella company, speak to a member of our team today. Call: 0800 121 6513.