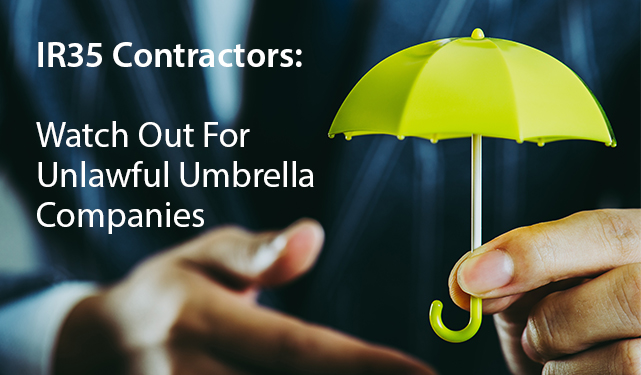 New IR35 rules due to take effect in the private sector from April 2021 could force thousands of limited company contractors to shutter their limited company and start using an umbrella company for the first time.

Joining an umbrella company is a tax efficient way to ensure IR35 compliance while also enjoying some for the benefits that come along with being an employee, such as holiday and sick pay.

Unfortunately some non-PAYE payment vehicles also describe themselves as ‘umbrellas’ and these schemes are often illegitimate.

What kind of umbrella company should I use?

Legitimate umbrella companies offer a very basic service. They deduct income tax and National Insurance Contributions from your pay and pay it into your bank account whilst retaining a small margin.

To try and tempt some contractors that may not be happy with higher rates of income tax and National Insurance, some ‘umbrellas’ advertise very high rates of take home pay. The only way that they can deliver on this promise is by cheating the UK tax system.

Miles Grady, Director of Umbrella.co.uk said: “Illegitimate umbrella services have been a blight on our industry for years. HMRC has never spent more on tackling tax avoidance, particularly from contractors, but we’re still seeing illegitimate services every time we search online for umbrella-related terms.

“It’s impossible to keep 80% or 90% of your income if you are paying all of your taxes. And the taxman will catch up with you if you try to get away with it.

Once HMRC gets wind of an unlawful scheme, they tend to come down hard on participants rather than promoters.

In the fallout from the 2019 Loan Charge it was revealed that many contractors were drawn in by professional advisers, but it was the contractors themselves that, in some cases, paid hundreds of thousands in back taxes.

HMRC recently ran an awareness campaign warning contractors not to get suckered in by cowboy operators. They highlighted the cases of nurse Tanya and IT project manager Duncan.

Even though Tanya was recommended onto an ‘umbrella scheme’ by an agency, and Duncan used an online comparison tool to find the best umbrella company, they both ended up on unlawful schemes. When HMRC caught up with both individuals, they were solely responsible for unpaid tax.

Hallmarks of an unlawful scheme include:

For more information about joining a legitimate umbrella company, speak to a member of our team today. Call: 0800 121 6513.

Umbrella.co.uk has become an APSCo Trusted Partner
Coronavirus: Contractors Working More for Lower Day Rates
IR35 Contractors: Watch Out For Unlawful Umbrella Companies
Challenges and opportunities for umbrella workers in 2021
What does ‘inside IR35’ mean for contractors?