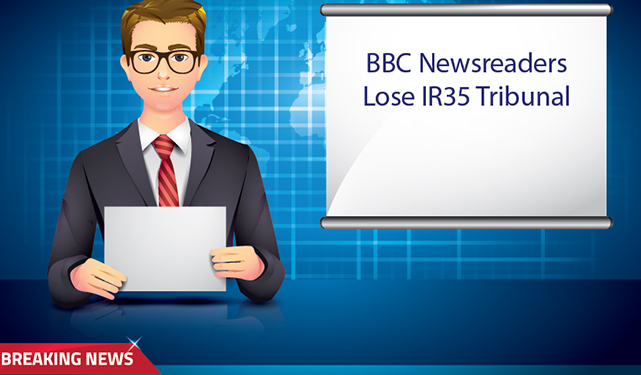 HMRC has recorded a rare IR35 victory after a tribunal decided that three self-employed BBC newsreaders were operating as so-called ‘disguised employees’.

By split decision, the tribunal ruled that Joanna Gosling, David Eades and Tim Willcox, who all operated through personal service companies, are ‘inside IR35’ and so should  pay income tax and National Insurance Contributions like regular employees.

Willcox, Gosling and Eades, who work on various programmes within the BBC News umbrella, argued that they were self-employed. But a majority of the judges decided with HMRC, which argued that the working relationship was one of employment, not self-employment,  because the Beeb told them how, where and when to work.

The Treasury did not recoup the £920,000 that it was hoping to collect from the three presenters, however, because the judges argued that the BBC had forced the trio into the wrong contracts.

They said: “The BBC were in a unique position and used it to force the presenters into contracting through personal service companies and to accept reductions in pay.”

For this reason, they decided on a lower figure thought to be in the region of £200,000. The BBC is reportedly considering paying this sum on behalf of the contractors.

HMRC has already brought several high-profile IR35 cases against television presenters, including Christa Ackroyd and Kaye Adams. It is thought that around 100 BBC presenters operate through personal service companies and could be subject to IR35 legislation.

Contractor interest group IPSE criticised HMRC and the IR35 adjudication process for taking the best part of a decade to resolve.

Deputy Director of Policy Andy Chamberlain said: “That this case has taken eight years and ended with an uncertain split decision shows how confusing and unfit for purpose IR35 is.”

Miles Grady, Director of Umbrella.co.uk said: “It is difficult to say what general lessons can be learned from this IR35 ruling. After all, BBC presenters are not your typical contractors and BBC News studios are not typical working conditions.

“Each IR35 case is different and should be judged on its own merits. This is evidenced by the fact that HMRC has won some of its cases against television presenters, but lost others. Notably, Lorraine Kelly defeated the taxman earlier this year after her lawyer argued that Kelly’s role was like that of an actor appearing in a 12-month run of a West End show.

“Lorraine Kelly won that case because they were able to show that ITV wasn’t controlling her as if she were an employee. In this more recent case, it appears that the BBC had a higher degree of control over the newsreaders. But the fact that the verdict wasn’t unanimous suggests that the legal system is still grappling with what constitutes inside and outside IR35.”

Got a question about IR35? A member of the Umbrella.co.uk will be able to offer advice on how to stay compliant in a confusing tax atmosphere. Call: 0800 121 6513.