Travel and Subsistence / hmrc / self employed

HMRC has been forced to issue revised guidance to contractors engaged through employment intermediaries after it made a drafting error in the travel and subsistence rules.

According to HMRC the legislation, which came into effect in April, ‘contains a technical error about where the supervision, direction or control test applies.’

The error relates to a ‘technical point’ that means the travel and subsistence changes apply for most employment intermediaries (including umbrella companies), but not personal service companies and managed service companies.

Although HMRC says that these changes will not affect the vast majority of contractors, it will amend the legislation as soon as possible.

Until the tax authority can amend the bill, it has issued new guidance to create a more level playing field between intermediaries.

The new guidance says that instead of applying the supervision direction or control test to contractors, intermediaries need to consider whether the worker would be an employee if engaged directly by the client.

If a contractor would properly be considered self-employed if the client engaged them directly, then the new legislation will not apply.

The only exception to this rule is workers who are engaged through managed service companies. The restrictions apply to these workers where they are under supervision, direction or control.

HMRC stresses that for most contractors, the outcome of the supervision, direction and control test and the new ‘engaged directly’ test would be the same, so this should have minimal impact on contractors involved.

However, the tax authority does concede that it considers the new employment status test “to be disproportionate and burdensome for the businesses who will need to consider this legislation.”

Because of this, HMRC will update the legislation as soon as possible to reflect the announcement made at Autumn Statement 2015.

HMRC has provided a useful breakdown of the restrictions before and after a new amendment is made to the legislation. 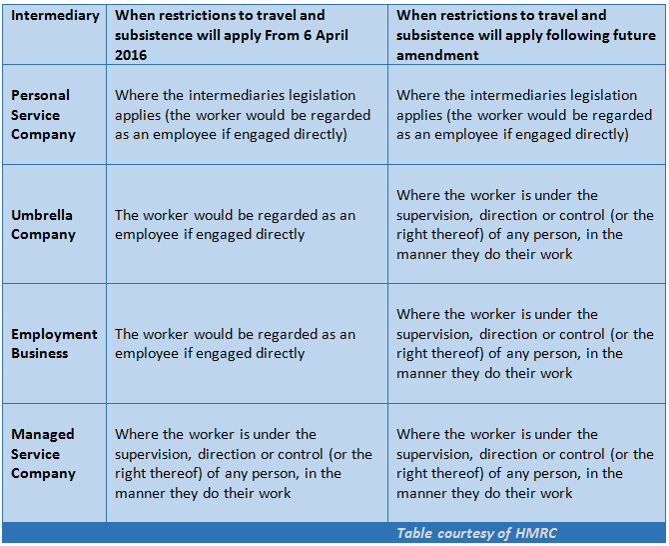